The following letter was sent to the residents of the Curnock Street Estate. The original documents can be found on this link.

My predecessor as Secretary of State for Transport, Phillip Hammond, wrote to you last year to let you know that the public consultation on the Government’s proposed plans for the development of a national high speed rail network, and on the proposed route between London and the West Midlands, had begun.

I am now writing to let you know that, following the consultation, the Government has decided to proceed with the plans for a Y shaped national high speed rail network, beginning with a new line from London to the West Midlands.

The consultation received almost 55,000 responses. I have carefully considered all the views and evidence put forward as part of the consultation, and I have concluded that building a new high speed network is the best way to provide the essential extra capacity that is required on our railways.

However, I recognise the comments, suggestions and concerns raised by many respondents about the impact of the proposed route on local communities. As a result I have decided to make several changes to the route, including greater use of tunnels and deep cuttings to avoid environmental, visual and noise impacts, including in the Chilterns Area of Outstanding Natural Beauty.

I have asked HS2 Ltd to continue to look at ways to reduce these impacts further by carrying out a full Environmental Impact Assessment on the route. I have also decided to introduce a package of measures to help those whose properties would be affected by the new line. There will be more opportunities for the public to get involved and have their say on the detail of this work in the coming months.
The Hybrid Bill process will give those affected a further chance to comment. A cross-party group of MPs on a select committee will consider the case for further mitigation.

The enclosed leaflet provides more information on my decisions and the next steps for the HS2 project. You can find more information online at http://www.dft.gov.uk/topics/high-speed-rail/, including the Government’s Command Paper High Speed Rail: Investing in Britain’s Future -Decisions and Next Steps, which explains the Government’s decisions in detail. You can view regular updates about HS2 by visiting HS2 Ltd’s website at http://www.hs2.org.uk/.

The Government has decided to develop a new national high speed rail network, the most significant transport infrastructure project in the UK since the building of the motorways.

Following in the tracks of the Victorian railway pioneers and the post war planners who developed the motorway network, the Government is signalling its commitment to providing 21st century infrastructure and connections – laying the groundwork for long-term, sustainable economic growth.

Listening to your views

In taking this decision we have listened to the views of local people and local communities across the country:

• The high speed rail consultation was one of the largest national consultations ever undertaken by the Department for Transport;
• The Government wrote to more than 172,000 people living or working near the proposed route. And it held 41 days of road shows visited by almost 30,000 people over a five month consultation period;
• Almost 55,000 responses were received, from individuals, businesses and organisations across the UK;
• There will be several more opportunities for consultation and engagement on many aspects of HS2 as the project moves forward.

The need for high speed rail

The growing demand for travel on the UK’s intercity rail network means that in the future our key north-south routes will become increasingly crowded.

After reviewing the evidence, the Government has concluded that a national high speed rail network from London to Birmingham, Manchester and Leeds (the Y-network) would be the best solution for enhancing rail capacity and performance on those key north-south corridors.

Not one of the available alternatives could match what high speed rail has to offer.
Upgrading existing lines cannot provide a long-term solution to capacity constraints nor will it significantly improve journey times or connectivity. It would also cause substantial disruption as upgrades took place. A new conventional speed line would cost nearly as much as a high speed line but would not provide any step-change in connectivity so would bring far fewer benefits.

High speed rail will bring a wide range of benefits including:

• A huge increase in capacity; a new network able to carry up to 18 trains per hour, built to international standards to carry larger, longer – and potentially double-deck trains;
• Released space on the conventional railway for new commuter, regional and freight services;
• Improved intercity connections and direct
international connections without having to change trains;
• Faster rail journeys enabling high speed to offer an alternative to many domestic aviation and car journeys;
• Better rail links between regional cities – halving the journey time, for instance, between Birmingham and Leeds;
• Improved links for business travellers, providing access to wider markets and enabling productivity and growth;
• Tens of thousands of new jobs and regenerated areas around stations, particularly at Old Oak Common in West London and Birmingham’s Eastside; and
• A foundation for potential future expansion of high speed rail.

To ensure its benefits can be realised at the earliest opportunity, the Y-network will be delivered in two phases; Phase one will deliver the London to West Midlands line with a link to Europe via High Speed 1, and phase two will extend the line to Manchester and Leeds and Heathrow airport. High speed trains would be able to continue on existing lines to serve areas not on the dedicated high speed lines.

The London to West Midlands route

In building new high speed lines the Government wants to do all it can to protect local people, their properties and the environment.

After asking HS2 Ltd to look again at the route in light of the consultation responses, the Government concluded that the proposed route corridor and stations, and the approach for mitigating its impacts, remained the best option.

It has committed to a package of alterations to the proposed route which will help minimise impacts on the local environment, communities and properties.

This includes extending tunnels in the Chilterns Area of Outstanding Natural Beauty and substantial additional tunnelling in the Northolt area of West London.

For those who are affected by the route, the Government wants to do all it can to offer assistance and support. It will introduce a package of compensation measures over and above the statutory minimum including:

• a refreshed hardship scheme;
• support for those affected by construction and measures to reinforce confidence in properties above tunnels;
• measures to simplify the compulsory purchase process;
• a sale and rent back scheme to give homeowners within the safeguarded area more flexibility.

The Government will draw up detailed proposals for consultation in Spring 2012.

Planning and building a national high speed network is a huge undertaking.
In developing its plans, the Government also wants to understand and address the concerns of those affected by the railway along the Y network as it develops and promotes its plans for high speed rail.

Approval to construct the first phase will then be sought through a hybrid bill in Parliament – giving those affected by the decision the chance to petition Parliament.
The timetable below reflects the need to balance what people have to say while acting quickly enough to reap the benefits of this groundbreaking project.

– Consultation on Environmental Statement for phase 1

– Introduction of a hybrid bill to provide necessary powers to construct and operate phase 1 of the railway.

You can read the document setting out these decisions in detail, High Speed Rail: Investing in Britain’s Future -Decisions and Next Steps, by visiting http://www.dft.gov.uk/highspeedrail

This site also includes all the supporting documents for these decisions and links to all the additional research and supporting material that informed these decisions.
HS2 Ltd will publish regular updates on its work on the project on the HS2 website www.hs2.org.uk

This site will also shortly include information on how HS2 Ltd plans to engage with local communities and organisations. 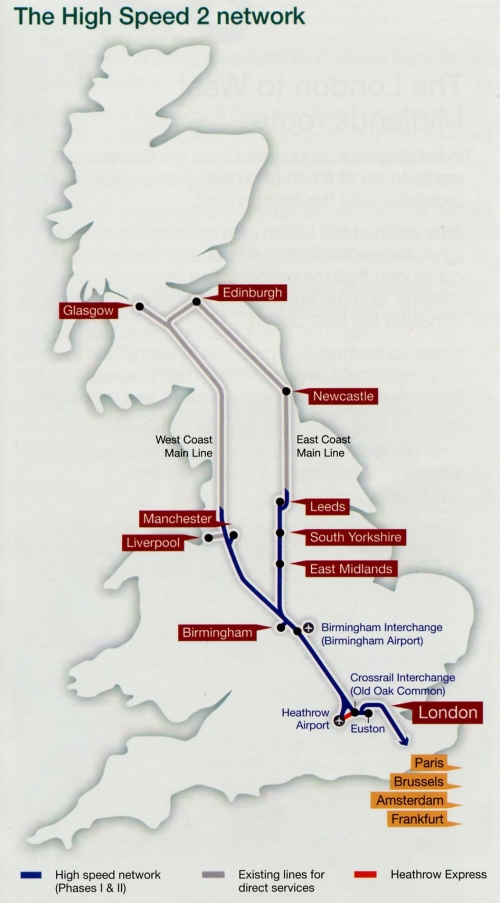 Route from Euston Station to Kilburn