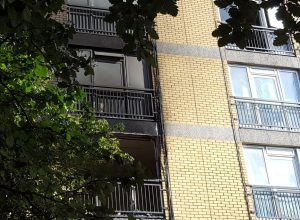 The fire in Mexborough building was worse than it was originally thought. The flat on the first floor was completely destroyed. They were no casualties.

As you can see from the images the whole balcony door and windows were destroyed by the fire and only part of the original frame is now visible. The fire was started on the bedroom of the property and spread to the rest of the flat.

Next to the bedroom is the bathroom and then the kitchen. A ventilation void is located between those areas and it connects all the flats below and above. This indicates that some smoke had travel via that void to the other flats.

From the outside photos it is apparent that the three flats above the damaged flat have suffered smoke damage as well as broken windows. The flat below might have had water damages.

Residents told us that their clothes and furniture were dirty but they did not want to be moved to another accommodation.

Most of the tenants affected are council tenants and we are waiting from the council to let us know the procedure in order for those tenants to make a claim.

Another resident had a fire on the estate and this is his story: www.lifeafterfire.co.uk