The planning application seems to miss some major points in their assessment. For instance, the application states:

“The existing front entrance doors are not fire-resisting. They represent a potential hazard to people escaping from the buildings where escape is only available in one direction, on upper floor access balconies, and would entail passing in close proximity to the door. The Fire Brigade have served a Fire Safety Deficiency Notice on the Council requiring the doors and adjacent screens to be upgraded.

It is proposed to replace those entrance doors which constitute a risk. Existing entrance doors at ground level will be retained, as escape from the building does not necessarily entail passing in close proximity to such doors.”

The statement implies that if the doors are replaced then the potential hazard will be removed. What about the kitchen windows that are next to the main entrance door?

The kitchen windows are not fire-resisting and a fire on that area according the statement above would definitely entails passing in close proximity to the windows. 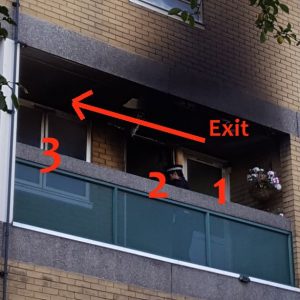 As you can see from the above photo the building exit is located towards the left. The fire in this case was in the position 2 (flat 53 in Mexborough) on the rear of the property. The residents from the flat on the far right (flat 54) could not escape according to the fire brigade due to the lack of fire-resistance in the main entrance of the destroyed flat.

Let’s assume that the fire was on the same flat but instead of the back of the building the fire was in the kitchen which is marked with the number 3. The escape for the residents on the far right flat (position 1) would be equally impossible as before even if the entrance door was fire-resisting.

This simple example demonstrates that the replacement of only the entrance doors does not solve any problem. It reduces the risk on one of the billion possible scenarios.

On both occasion the fire was nowhere near the front doors but the advise was to stay inside.

What is the point of a great fire-resisting doors if the fire brigade is advising residents to stay inside even when the fire is nowhere near the main door?

The application as well as the recommendations from the Fire Brigade have the purpose of stopping the fire from inside the flat from reaching the communal balconies and therefore from preventing the other residents to reach the fire exit.

The question is what is behind the main entrance doors?

In buildings like Warmsworth, Trimdon and Goldthorpe there is a big long corridor. In buildings like Mexborough there is an even longer corridor behind the door. The corridors are in such a way that big bulky items cannot be stored there. This means less risk of fire.

The flats kitchens and the windows on those areas however, are exactly the opposite. What is it more likely to catch fire? An empty corridor or something in a kitchen?

The flats in Mexborough have also have a huge hole near their kitchen’s windows for the electric ventilation fan. That fan and the hole is in the middle of the wall and it is a potential hazard because the ventilation hole could obstruct the balcony with smoke or flames. This means that the residents would entail passing in close proximity to the kitchen ventilation fan.  Will the council install some fire-resisting barrier there? 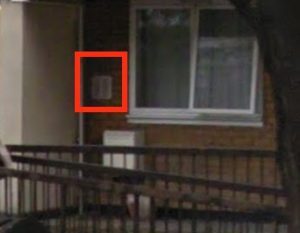