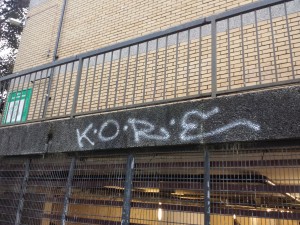 Mr Gary Nicholls, Estate Services Supervisor, informed us today that “the graffiti has been removed.

However, there has been some deep bleeding into the concrete wall which cannot be removed and which has caused some shadowing. This occurred due to the concrete being very porous. I hope you can understand that this is beyond our control.”

On the 21st October 2014 we sent another email to Mr Nicholls regarding the graffiti around Darfield. There are two that have not been removed yet.

On the 21st October 2014 we received the following update from Mr Nicholls:

I have now raised an order for the following graffiti to be removed;

Warmsworth – Graffiti on side wall near rear garden of flat 18.