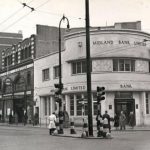 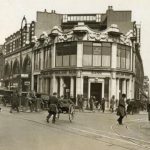 Here’s a great pic of Camden Town tube station taken in 1927 with the road layout much as it was until the 1960’s when the one-way systems were introduced in many parts of London and featuring tram tracks, period cars and a couple of hand carts – plus a copper who looks like he’s on a mission!

Wikipedia tells us that “the station began life as part of the original route of the Charing Cross, Euston and Hampstead Railway (CCE&HR) (now part of the Northern Line). As the line here branched into two routes, to Hampstead and to Highgate, the design of the station was rather unusual, shaped like a V. The line to Hampstead (now the Edgware Branch) is under Chalk Farm Road; the line to Highgate (now the High Barnet branch) is under Kentish Town Road. With the narrowness of the roads above, and the necessity to keep directly beneath them to avoid having to pay compensation to landowners during construction, on both lines the northbound platform is directly above the southbound one.” More information on this here  en.wikipedia.org/wiki/Camden_Town_tube_station