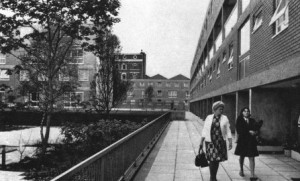 The Curnock Street housing scheme in Camden Town was designed by Boissevain and Osmond (job architect 1. Blacker) for the London borough of Camden. It shows the way in which integrated design, architecture and landscaping can create a livable-in environment’ The caption appreciations are by John Donat, who also took most of the photographs.

The Curnock Street housing scheme is important because it shows a very real attempt to renew a run-down part of London in such a way that the design of the detailing adds up, as far as possible, to a rational part of the total environment. This is the only criterion by which design can be properly judged. Not surprisingly, the scheme has won one of this year’s Civic Trust awards.

Built on a seven-acre site close to a busy thoroughfare and shopping area, it consists of seven blocks – maisonettes in four-storey buildings, one block of three-storey houses, and a six-storey block of flats with garages underneath surrounding four tree-planted public gardens; altogether there are 284 individual homes. There are no private gardens, but the landscaping is an integrated part of the environment and not an afterthought to make it look more attractive than it really is. The scheme includes a pub and children’s play equipment.

The access areas for service vehicles introduce a singularly barren note; and another criticism could be made of the number of fences and the very long pedestrian ramps, which too often dictate the way people must walk. They are not obviously necessary, and could create the kind of frustration that sometimes leads to vandalism. But on the whole the scheme is so designed that the more one adds to it, the better it will become: this is one of its best qualities, and one modern architecture too rarelly permits. 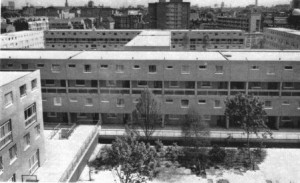 Twelve simple rectilinear blocks define four large landscaped courts. The underlying regimentation of the architecture is softened by skilful planting that is still very young: it will get better and better as the soft landscape matures and begins to take over.

The spaces are generous. There is plenty of room, not the least feeling of claustrophobia in spite of

relatively high density, an effect achieved by an architecture that is deliberately discreet and neutral: Expressionist bombast and rhetoric would produce the opposite effect. More might have been made of the glimpses of rickety, lively, marvellous Camden Town peeping through the gaps between the new blocks-reminding you that you are right in the middle of a place that is alive. The oasis of the new development is perhaps a bit too completely protected from friction and involvement with the environment that surrounds it. 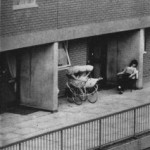 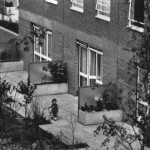 Privacy is nominal because of a confusion of public and private spaces. But a place in the sun, left, can still be defiantly enjoyed, and even a tiny outdoor space to call your own is preferable to an unusable, minimal balcony: and it is the absolute minimum a family should expect of the environment. The bushier the landscaping gets the nicer it will be, and psychological privacy will increase. 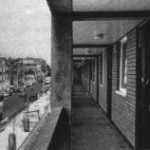 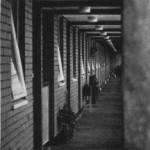 The casual anarchy of a decrepit past, left, faces our own too efficient, too theoretical alternative that demands some outrageous and exuberant response. Here, left, it is beginning potted – plant folk response to regimented design. Perhaps all the access galleries will become hanging gardens of Babylon with time. 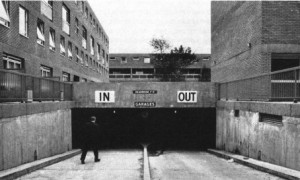 This anonymous resident, above, isn’t Patrick McGoohan walking in to withdraw his resignation . . . but why use access obviously intended for the exclusive use of cars ? There must be a reason: perhaps the ways in and out of the garage at podium level are too far from his flat.

The original pages from the Design Journal can be found below: 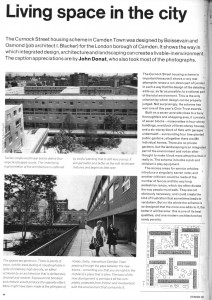