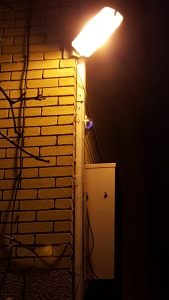 The council has now relocated some of the CCTV cameras from Warmsworth to Barnborough. Two of the cameras are installed above the rear entrance of the refuse room and the third is installed on the side wall of Barnborough which is facing the Marr building.

The whole idea of the relocation was to be able to monitor the whole path between the Barnborough and Goldthorpe buildings. However the cameras are not installed as before in equal intervals as before and it is our opinion that the path is not covered in a satisfactory way.

We have asked some clarifications of the above from Ms Natasha Dickinson as well as why some residents have refused the CCTV cameras to be installed above their patios.