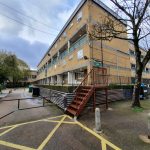 The council has decided to replace the set of metallic stairs attached to the side of Billingley building. The stairs are near the gates located on Pratt Street and lead to Billingley.

There were many complaints before regarding those stairs because they were slippery but we don’t think that was the reason for the replacement since the stairs are identical to the old ones.

Residents raised their concerns when the works started because they had not received any information from the council or the estate officer about the works. Also the removal of the stairs for a couple of days meant that all the residents in Billingley had to walk all the way to Goldthorpe, use the ramp and then alongside Goldthorpe and up another set of stairs before they could reach their flats.