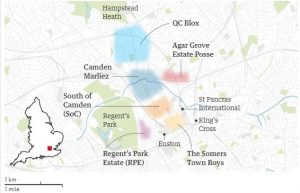 Police inactivity and incompetence made the headlines again. The Guardian had an article today showing how the gangs in Camden killing young men without the police being able to do anything. In the article it states: ““They are fearless, even the 15-year-olds. I swear the police are scared,” said resident Abdul Musavir, outside the Baitul Aman mosque.”

That explains the whole situation in our estate. Police is called and either they don’t come or they make obvious there are close by so the dealers have enough time to escape. Sometimes they arrive at the wrong address pretending  to care. They even ignore residents and not respond to official complaints.

The situation is so appalling that almost leads to anarchy. Three deaths in 5 days and two stabbings in a merciless war in which police is just a witness. Who is responsible for the law and order? Who suppose to protect residents and people if the police is unwilling to take action?

These questions are in most people’s minds, especially when the police spend most of their time in Twitter and PR activities to show that they have arrested someone with 0.1gr or weed!

Read the article in The Guardian.