On 2006 the wall that is located in front on Billingley House was damaged. Several months later the Camden Council managed to repair the wall. Unfortunately they removed all the tress.


Many damages and noise problems has been reported on this area. 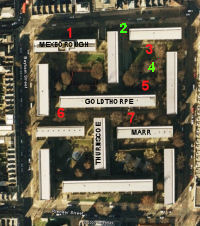 24-05-2007 Ms Dawn Aldred have spoken to the Housing Surveyor responsible for
managing this case and can inform you of the following:
a) Camden’s Tree Section has been requested to advice on what remedial action (if any) can be taken to prevent the roots of the trees causing damage again to the wall when rebuilt.
b) costs are being sought by the surveyor to repair the wall.

12-06-2007 Ms Dawn Aldred have asked the surveyor to up date her regarding the progress and she was hoping to hear from her in the next couple of days. The surveyor leading the repair is Ms. Asmau Nasir-Lawal.

12-11-2007 Cllr Roger Robinson wrote to Mr Keith Pettinger, Quality Support Officer, asking about the wall and if this repair was part of the cuts to estate
expenditure just announced.

15-11-2007 Mr Pettinger have spoken to Dawn Aldred, patch manager today who advises him that the present situation is that Asmau Nasir-Lawal, building surveyor
has been onsite and has specified the works and needs to meet with Dawn to agree the exact works with the contractors. Mr Pettinger have no further information on this matter.

16-11-2007 A contractor has provided a specification which includes costs to repair the wall which are acceptable to the Council. Ms Nasir-Lawal is waiting for
a report from the Council’s Agricultural Team on what further movement/growth might be expected from the trees that originally caused the wall to collapse before the repair order can be raised. Ms Nasir-Lawal will be able to update us on her return (22nd November 2007) with the expected date that the works can start on site.

23-11-2007 Cllr Roger Robinson sent the following e-mail:
“But how long is this process taking? Have we a date for a final report and action to be taken….is it this year or when? Can we move faster on this?
Please advise as I am very concerned.”

26-11-2007 At this point the Camden Council is unable to give definite time scales – this is because the process of actually getting to site at this point is dependent on several factors. Council standing orders for example requires that it receives quotes/estimates from at the very least two contractors – so far and even though Camden Council has asked several contractors for an initial estimate only one of them has shown any interest.

It is also the initial estimate that will determine whether or not there will be any requirement for leasehold consultation which will take at least 60 days, depending on observations received. Camden Council is also awaiting the tree report which will help finalise the works specification – this should hopefully be received shortly.

07-03-2008 The Camden Council has decided to remove the trees. An e-mail was sent requesting the reasons for that decision and in order to find out if the Camden Council will fix the wall or not.

10-03-2008 The Camden Council has informed us that:
“The damaged wall is presently acting as a retaining wall but was not designed as one. Aside from this there is the added pressure to the wall from the tree roots which again the wall was not designed to cope with. To repair the wall with the trees in place would require a new design with major foundations which would not only involve major works but significant change to the present arrangement. We have also decided to remove the trees for health and safety reasons considering the wall backs unto a playground.

It is possible to repair the walls with the trees in place but it is not viable. The order for the repair works have been raised and I understand contractors are now on site.”

11-03-2008 Jackie Smyth promised to investigate this matter and get back to us as soon as possible.

18-03-2008 Jackie Smyth informed us that: “I have a had a look into this but I am afraid that I cannot add a great deal to the comments made by the surveyor Ms Nasir – Lawal.

There was confusion over who was to deal with these works as more than one officer was involved. That is why the implementation was not carried out as smoothly as it might have been. (By that I mean consultation with residents and lack of information on timescales).

I do not know who put in the trees/wall in the first place but if they are not suitable for purpose than quite correctly officers need to carry out an option appraisal that looks at issues such as costs.

I am advised that choices/decisions were carried out in-house so officer costs will be included in the normal running costs of the service.

I would apologise for any misunderstanding in this matter and inconvenience…”