Veolia are started to use the security gates between Goldthorpe and Barnbrough against the agreement between the Curnock Street TRA, Caretaker supervisor and Veolia. Our caretaker supervisor, Marcio Rodrigues, has stated in his email (28th March 2022) to Veolia that: ” It was agreed with their Manager that they wouldn’t use those gates.”

Unfortunately, last week the Veolia crew did use the gates and we have complaint to Vincent Liuzzi ( Environmental Manager, T:+447825 922350) about it. He replied to us with the following message:

I have spoken to crew who have advised that the weight of the bins on a Monday is the reason why.  All security gates are locked after use

On the same date we replied with the following email:

Hi Vincent, Marcio and Gary,
This is not a good excuse since they had to pull the bins to the other side of the estate which is longer than the normal route.
@Vincent Could you please explain to me the difference between the two routes on the attached areal photo (routes are marked) and why Veolia emptied the Barnbrough’s bins from the back of the building instead of the front as they normally do? 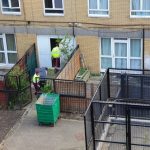 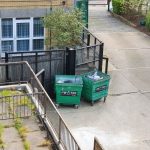 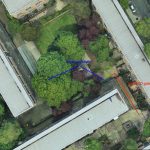 Why did the crew emptied the Barnborough bins inside the allegedly “overweighed” bins in front of Goldthorpe (one of them almost empty)?
Please look at the attached photos and tell me if the photos showing the bins at that particular date. Two of them were not full and the third was empty so your employees’ excuse is really offensive. Do they think that we are stupid?
@Marcio Could we please permanently lock those gates so Veolia never have access again especially when we receive those lame excuses?
…..
@Gary When does the contract with Veolia ends? Who do I have to speak regarding this as we will vote against any renewal if they continue with the same practices?
…

Later promised to reply with an explanation but he never did. Today, 04th April 2022, the Veolia crew did they same thing. We contacted Vincent with the following email:

Good morning Vincent and Gary,
I have not received the explanation that you promised to send us last week and today your crew emptied the bins in front of Billingley but they have not emptied the bins in front of Goldthorpe (near flats 1-2).
@Gary When does the contract with Veolia ends? Who do I have to speak regarding this as we will vote against any renewal if they continue with the same practices?

We also sent this email:

Hi Vinvent,  Marcio and Ms McGowan,
Veolia’s crew opened the security gates AGAIN and ignored our agreement with them as well as Vincent’s email last week.
@Marcio  Could you please LOCK those gates permanently? If not, I will locked them and Veolia will not use them.
@Gary I need the information about VEOLIA’s contract or I will consider legal action. This contract must NOT renewed at any circumstances. I will raise this DMC and other TRA’s.
@McGowan Veolia is now considered to be a nuisance and a problematic contractor that ignores residents and our security. What can you do about this?
I am expecting your answers ASAP but those gates will not be used again.

I have explained the reason crews collect from that side on a Monday to your caretaker Marcio.
He will advise you on the reason
Be reassured that gate’s are locked after collection
Thanks

Today Curnock Street TRA has launched an official complaint against Veolia and their behaviour:

Dear McGowan, Bronagh and Jonathan,
Further to my previous emails about the official complaint against Vincent and Veolia please look at the email below as well as the attached photos in which I proved to him that he lied to us.
His crew clearly stated that the reason was the weight of the bins. Please look at the attached photos showing one empty bin and two half full bins. The photos also showing how Veolia’s crew fill the “overweight” bins with more rubbish and how they left the bins on the way out.
On the same date. 28th March 2022, Vincent promised to find out what happened and why his crew lied to us. He never came back to us and Marcio did not have any further information to sent us. Vincent lied again about it in his last emails.
Veolia has many times left the gates open, they were rude to me and other residents, they clearly stated in front of Marcio and Lloyd that they do not want to learn anything or do anything differently even if their actions put us in danger, they do not respect us or the security on the estate and more importantly they are not trustworthy.
Please also look at the attached photo (veolia-securrty gates.jpg) and see the agreed route to empty the bins and the one that the crew is using in order to deliberately upset the residents and compromise our security. The agreed route is shorter and direct.
Their lies are not something new. Please speak with Gary Borg and Vincent Liuzzi when in front of everyone in the DMC meeting, they admitted that Veolia’s crew dumped commercial rubbish inside the estate. That foolish action had as a result to upset many people, waste council’s police’s and my time. The result was:
1) Arguments between residents and Caffe 43 owners.
2) Official report to the police about Caffe 43
3) Caretakers (Marcio and someone else) had to take the bin bags out of the bins during Friday afternoon and store it behind the gated doors.
4) Dean Hall had to come and investigate the rubbish. After that he visited Caffe 43 and told them about it. Photos available.
5) Caffe 43 owners got more upset about me and made remarks to me while I was leaving my home.
All of that because Veolia crew was LAZY and they lied to us.
Finally, look at today’s photo about the new stickers that they installed a few days go. It is clearly showing the quality of their works and their mentality. Stickers are falling apart and the bins still showing Commercial Waste even if they intended for household rubbish.
As a chairman of the Curnock Street TRA I expect an official complaint to be registered and have a formal response to this issue.
Yours sincerely,

Dear McGowan, Bronagh, Jonathan and complaints
Vincent lied to us one more time yesterday when he said that: “..collections need to change to protect the welfare / health and safety of our operatives.”
The procedures have not changed because Veolia managed to empty the bins on Friday 01st April 2022 from the agreed route and not via the gates. Only one crew does not want to comply because we have complaint against them in the past.
See the video below from the collection last Friday 01st April 2022:
https://video.nest.com/clip/2b7ff3648ef84633b6afe46ee9d10a40.mp4
Watch the whole video. They entered via Camden Street going backwards with the potential to damage our planters, then they go all the way to Bayham Street entrance, empty the bins there and then they leave from Camden Street without doing ANYTHING near the gates (i.e. empty the bins).
Now watch the following video from 04th April 2022:
https://video.nest.com/clip/61b09962eaaf4724a15b2183253a4b1f.mp4
It clearly shows that they are following their procedures as and when they want to.
On the 03rd January 2022 Veolia had left ALL the security gates open and allowed the drug dealers to trade freely around the estate putting residents’ safety at risk. See attached email.
Further down on the same email you can read Marcio’s comments stating:
“Thank you for your time this morning with Veolia Manager Vincent. It has been agreed that they will no longer use the gated area to pull bins through and the refuse collections will take place via Pratt Street. I also placed the padlock at the bottom of the gate this morning to secure the locking post that goes into the floor so it can no longer easily be lifted.”
On the 23rd December 2021 I had also reported the following (see attached email):
“Hi Marcio and Gary,
The gates were unlocked again immediately after I locked them. Someone has a key and they are abusing the area behind the gates.
Please advise Veolia to empty the bins from Pratt Street and let’s make a plan to secure the gates.”
There are much more emails showing the problems and frustration the residents had because some contractors are simply LAZY. If you think that this description is too harsh then look at the email I have sent to Bronagh Todd on the 28-05-2020 during COVID restrictions about Veolia stating:
“The Veolia guys are resting under the trees inside the estate without working but just playing. For instance they thrown their grooms towards the ramp leading to Goldthorpe earlier for fun. Are they paid for socialising/playing in close proximity to each other or are we paying them for working and cleaning? The dirty nappy is still on the same spot they were socialising.”
I have also attached a photo of Veolia guys showing how “hard” they work during COVID restrictions without respect for the lockdown restrictions or residents safety.
I have more evidence and more videos. I will run through my archive until this situation is resolved once and for all.
PLEASE PROVIDE A COMPLAINT REFERENCE NUMBER.
More evidence to follow.

Thank you for your complaints query, received.

Unfortunately issues against Veolia fall outside our complaints process. However we have passed your message (including full attachments) over to Veolia who will contact you directly as soon as possible to help resolve your case.

On the same date we have permanently locked the gates until the council starts to take us seriously.