Recently it become apparent to the council and Veolia that are bins are overweight. What are the reasons for this, how often does it happen and who is responsible?

Fish Rots from the Head

This idiom means that if the person in charge does a bad job, it will have negative implications for everyone working under him or her. In our case the problem is Camden Council and the people responsible for the waste collections (Gary Borg & Vincent Liuzzi) as well as Housing Neighbourhood Managers and Officers.

Many times in the past residents have reported the following problems and the council either did too little or nothing to address them. In some cases they took action so late that it did not have any effect. As a consequence the situation has become worse and now the council does not want to accept its responsibility.

What are the reasons for the overweight bins on our estate?

Veolia crew tilts the half empty bins, pull the bin bags out of those half full bins and put them in the already full bin. 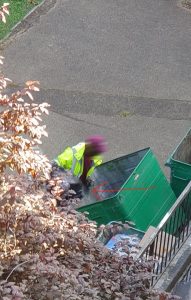 Now look at the second photo below of the overweight and overfull bin which the Veolia crew filled and made it heavy.

The black guy managed to

BUT more importantly he did not care about any  “Musculoskeletal injury”. Why?

It is another example where Veolia does things their way by using excuses to cover their bad attitude and practices.

Please also see the white bin bag on the overweighed bin. This is our bin bag which was at the bottom of the half empty bin deliberately.

Reason No2 – Fly Tipping by Veolia and Non Residents

A lot of street properties in Pratt Street, Georgiana Street, St Martins Close, Camden Street, etc are using our bins for their household rubbish as well as for their bulky items. Those incidents have been reported to the council and some action has been taken. However, not enough to stop the problem.

The fact that Veolia was taking (and possibly still do) commercial rubbish and dumped them inside our estate made the situation unbearable. Residents had to argue with the businesses, police was called, caretakers spent so much time trying to help, for Gary Borg and Vincent Liuzzi to tell us during a DMC meeting that the culprits were actually the Veolia’ crew.

Another example of fly tipping is the following, where an investor from Camden Street was dumping his rubbish inside our bins because he did not want more rubbish outside his flat which he was trying to sell. He dumped iron boards, wooden pallets, huge cushions, etc

The fly tipping has as a result our bins to fill very quickly and the rubbish to over spill all over the area. See below:

Reason No3 – Bulky Items Inside the Bins

A few residents still do not know or they don’t want to know, how to dispose their bulky items properly and by using the right method. Some of them, they have dumped building materials inside the bins, some of them have dumped carpets, furniture, drawers, etc inside the bins.

When those incidents were reported to the council, no action was taken. This inactivity has allowed those residents to continue with their practices.

See an example below:

As you can see from the photo above someone (details have been submitted to the council) had dumped their carpets on the bins preventing all other residents from disposing their rubbish. On top of that the carpets are heavy and they are not supposed to be dumped inside the bins. NO ACTION from the council.

Now look at the following photos which is another recent example where a resident (details have been submitted to the council) had dumped carpets, metal bars, building materials and toxic paints inside the bins. NO ACTION from the council.

The above incident has occurred on the middle of March 2022. It has been reported to the council. NO ACTION from the council.

How Often do these problems occur?

The problems mentioned below do happen frequently and they have a major impact on all residents for many reasons:

An example of the above can be seen on the photos below: